Nintendo gave the Wii U a much needed boost towards the end of 2015 with Super Mario Maker. Utilising the worlds from Super Mario Bros, Super Mario Bros 3, Super Mario World and New Super Mario Bros U, it primarily serves as a level creator, and a damn fun one at that. It allows you create obstacles and enemies never before seen in the Super Mario series, giving birth to some of the most wacky, ambitious and outright challenging levels ever.

Porting the game to the 3DS gives players without a Wii U the chance to flex their creative muscles, but it has also brought some frustrating limitations that hold it back from its older sibling’s greatness.

The creation suite remains largely the same. You’re given the option to pick from each of the aforementioned Super Mario game worlds, with each one bringing subtle changes to the core gameplay. For example, in the original Super Mario Bros, Mario is unable to pick up the shells of fallen Koopa Troopas, whereas he can in the latter game worlds. Similarly, in New Super Mario Bros U, a quick tap of ‘R’ after a long jump will cause Mario to spin, adding a bit of extra distance to his jump. It’s important to take note of these differences when creating levels with a unique flair. 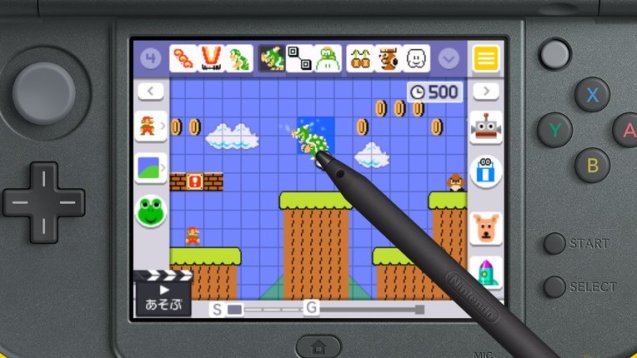 After choosing the game world, you can pick the specific environment in which to base your level. You can choose from ground, castle, airship and more. Aside from the underwater environment, most of these choices simply change the visual aesthetics of your level. This can lead to some truly bizarre sights – you may assume a level set in the ground environment would be perfectly safe, until you come across two or three giant Bowsers, one with wings, blocking your path. Experimentation is encouraged, and can lead to some truly joyful moments.

Customising your level is intuitive thanks to the touch screen. You use the stylus to drag various elements across the screen, creating intricate platforms and obstacles within seconds. All the standard creation tools are available; you can use the eraser to tweak your designs, or the undo button to go back a few steps. It’s wonderfully simple, and finishing a level gives you the confidence to go back and do more, and do it better.

Unfortunately, sharing your finished level online is now a thing of the past. Much of the community aspect of Super Mario Maker on the Wii U is lost with the 3DS version. You can share your levels via Streetpass and local play, but discovering levels built by others is limited to recommended choices by Nintendo themselves. Ultimately, Super Mario Maker for the 3DS is a solo experience, which is a shame, because seeing feedback from players for uploaded levels on the Wii U version gave a sense of accomplishment that is now lost with the port.

Thankfully, to compliment the community created levels is Super Mario Challenge, a collection of eighteen worlds officially created by Nintendo for you to play through. Each world contains approximately four levels, which are designed to gradually introduce you to new elements to mix up the gameplay as you progress. This is a also an effective tutorial on how to utilise the unique course elements in your own creations. Most importantly, it’s a valuable lesson in good level design.

Additionally, each level packs in two collectable medals based on certain criteria met during play through. For example, you may have to finish a level whilst the screen is warped, or collect all coins within a certain time limit. Some of these tasks can be devilishly difficult, and will test the patience of the most experienced Mario player.

As you work your way through Super Mario Challenge, the completion of each world will unlock new objects and enemies for you to use in the creation mode. I would normally lambaste the idea of having to play through one mode in order to benefit another, but these levels are often so clever and so much fun to play that I actually don’t mind. It is however quite frustrating to have to sit through the incessant chit-chat of the game’s tutorial characters – Mary O, a friendly customer service type woman, and Yamamura, a bloody pigeon. Still, they’re there if more inexperienced players need their help and guidance.

Returning from the Wii U version is 100 Mario Challenge, which gives you a colossal one hundred lives to tackle a collection of randomly selected user created levels. You can pick the difficulty, but even on the easier settings some of the levels come with some maddeningly frustrating sections. This is both a blessing and a curse; on the one hand, it’s outright annoying to lose numerous lives right at the beginning of a level, but on the other it’s nice to see a certain complexity in level design that Nintendo wouldn’t be so bold as to attempt themselves. 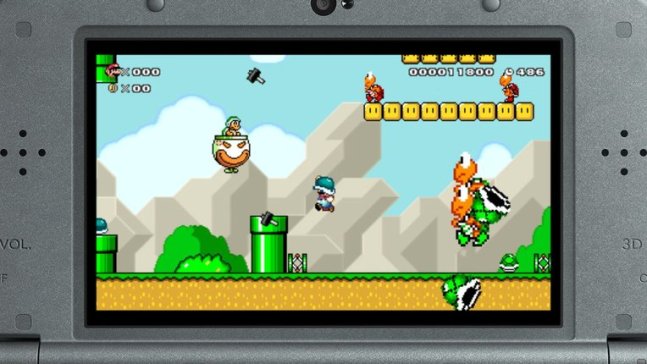 It’s hard to look past some of the limitations required to port Super Mario Maker over to the 3DS. What was once a thriving community based game has been transformed into a largely solo experience in order to facilitate the portability. Nevertheless, this doesn’t take too much away from the fact that Super Mario Maker is a superb level creation game, with dozens upon dozens of options at your fingertips. Complimented by some of the best, most inventive Mario levels Nintendo has come up with in years, and you’ve still got a surprisingly robust experience. Players already familiar with Super Mario Maker on the Wii U will find nothing here that can’t already be experienced on an HD screen, but for those without a Wii U, Super Mario Maker for the 3DS is an essential addition to your collection.